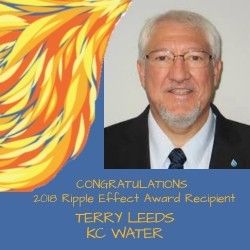 The Ripple Effect Award was established in 2016 to recognize an individual or organization at Blue River Watershed Association’s annual Water Ball event that has embodied the Association’s mission to restore and protect watersheds through environmental education, community outreach, partnerships, and collaboration through dedicated efforts that have caused a ripple effect of positive change throughout the Kansas City Metropolitan Area.

Recipients of the Ripple Effect Award receive a royal blue water drop award that is layered and surrounded by crystal clear glass symbolizing significant recognition and sacrifice in restoring watersheds. Each award is individually hand crafted, with no two awards identical in size, weight, shape or color, just like the award recipients who will receive this award each year.

“Terry Leeds is a true supporter of the community,” said Lynn Youngblood, executive director of the Blue River Watershed Association. Youngblood continued, “Mr. Leeds goes out of his way doing whatever he can to support the local nonprofits with their work in water quality, reducing stormwater runoff, improving vacant lot projects, and other means that nonprofits work in and with communities in the Kansas City area. Throughout many years, Mr. Leeds has supported BRWA and its work with schools and communities in water quality education and stormwater reduction. He has been a great partner with us.”

Leeds brings 29 years of experience in the water industry.  He began working for Kansas City Water Services in December 1995, and during his tenure he worked in the Facilities Engineering Division, the Stormwater Engineering Division, and the Capital Improvements Management Office.  In July 2005, Leeds became the Manager of Kansas City’s Overflow Control Program, a large and complicated 25-year, $4.5 billion federally-mandated project.  He served as the Acting Director of Kansas City Water Services from August 2010 until he was named Director in January 2012.

Join BRWA on November 2, 2018 to congratulate Mr. Leeds at the V.I.P reception and program at the annual Water Ball at the Museum of Prairiefire. To get tickets or a table visit www.brwa.net/waterball.

The Blue River Watershed Association (BRWA) was initiated by a 7th grade science teacher in Kansas City, Kansas in 1996 and began the T.R.U.E. Blue Project (Teaching Rivers in an Urban Environment: The Blue River Watershed Project). In 1997 BRWA was incorporated as a 501(c)3  non-profit with a mission to restore and protect watersheds through environmental education, community outreach, partnerships, and collaboration.